The following is an item on it from the British Numismatic Society: 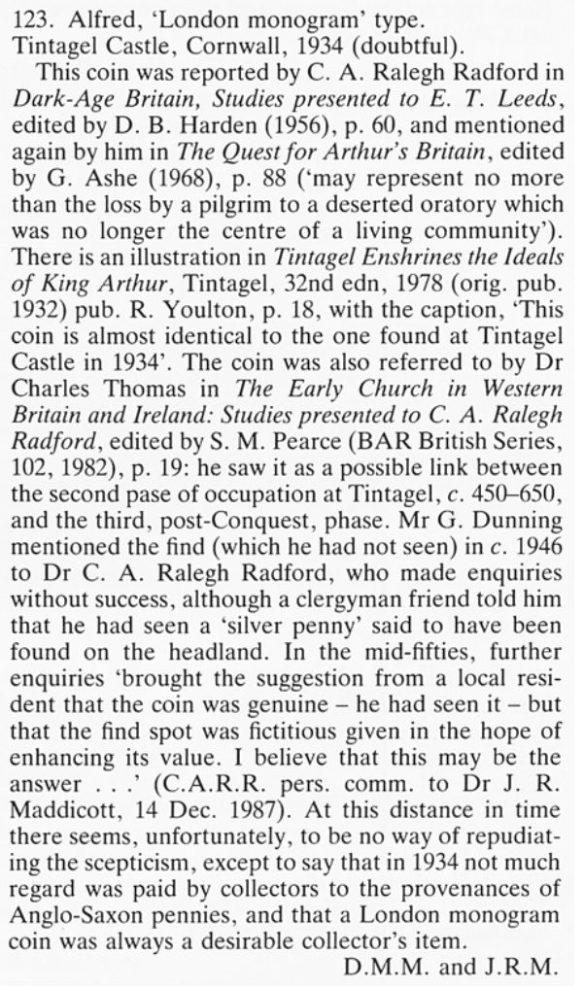 The excavations between 1990 and 1999 text, Excavations at Tintagel Castle, Cornwall, has the following account:

The original chapel may well have been dedicated to Coliavus, see Coliavus, a name with Arthurian associations. One could speculate the coin was not an accidental loss but rather placed near the chapel if Tintagel had already been identified with Arthur in the 9th C and, perhaps, Alfred saw himself as the new Arthur.

Asser tells us Alfred visited Cornwall on a hunting expedition. This would have been some time before his marriage to Ealhswith in 868. He prayed at a church which held the body of St. Gueriir, which is now called St. Neot. Doble suggested the original saint was Gwinear, who was murdered by Teudur. That ruler is mentioned in the V. Petroci and the Beunans Meriasek. He also appeared in the V. Breacae, according to Leland. We may, therefore, conclude that Gueriir is likely to have been a contemporary of Arthur. Perhaps, therefore, Alfred had an interest in Arthur even before he became king, and later was his role model.

In 2017, during the dig at Tintagel which was commissioned by English Heritage and done by Cornwall Archaeological Unit, a 7th C inscription was found at the southern terrace which like the 1998 discovery had inscription indicating a mix of different cultures. The dating may be a reference to the fact that the site was a post-Roman occupation from at least the 5th to the 7th C.

Two of the names that appear are Budic and Tito. The former is well-known and appears as an alternative to Emyr Llydaw, amongst other instances. The latter name, Titus, appears on an inscription located at Tawna, Cornwall, see CISP.

The stone will be examined further. I would propose the possibility of there being a third name. I believe what has been interpreted as “viri duo” is a reference to the name “Viridu”. The small circle at the end of that name has been misinterpreted to be an -o-. The use of such a symbol can be seen on the inscription at Lancarffe, also in Cornwall, see CISP.  Charles Thomas interpreted that to mean “of”. So the first part of the inscription states:

The final name has been written incorrectly as “Viridu” where the -u- is an error for -ii- or -i-. The same mistake was made at Lanivet, in Cornwall, as pointed out by Thomas, see CISP.

The gens Viridia was a Roman family. The name is related to that of the Celtic god Viridius or Viridios. Dedications to him as well as a possible image were found at Ancaster, Lincolnshire. It has been suggested that the name may refer to “virile” or “verdant” and to associations with the Green Man.

Viridius appears in the Arthurian Romance as Gweirydd ap Llew, the brother of Gwalchmai. He may be a doublet for Gareth. Their names appear in the Marchogion y Vort Gron (Soldiers of the Round Table). In the Vulgate cycle these names appear as Guerrehes and Gaheries respectively. He may have been Gwair dathar Weinidog with the cognomen Adarweinidog ([having] bird-servants or servant of birds) who appears in CO and had the daughter Tangwen.

Since Gweirydd’s mother was Gwyar, the daughter of Gwrlais and Eigr, it is not surprising for his name to appear at Tintagel. Nor so with Budic since Gwyar was first married to Emyr Llydaw and then to Llew ap Cynfarch. The name that the HRB gives for ByB’s Emyr Llydaw is Budic. That these figures of the Arthurian tradition are to be considered historical is a reflection of the fact that Gwalchmai belongs to its earliest stratum.

The triads give some indication of the naval powers at the time. Triad 14 mentions the Seafarers/Fleet Owners. Geraint ab Erbin and March ap Meirchion were both of Cernyw. There must have been frequent communication between this kingdom and those of Brittany for the LL to regard them as “one people and one language”. Triad 15 gives the Roving Fleets and Bromwich suggests the names may indicate they were Irish while those of the previous triad were British[1]. It may be that with Tintagel being on the north coast, the Cornish and Irish together controlled all trade going through the Irish Sea. Likewise Dumnonia and Brittany could have dominated commerce through the English Channel.

Discoveries from under floors and turf, stories of past lives, the ordinary and extraordinary